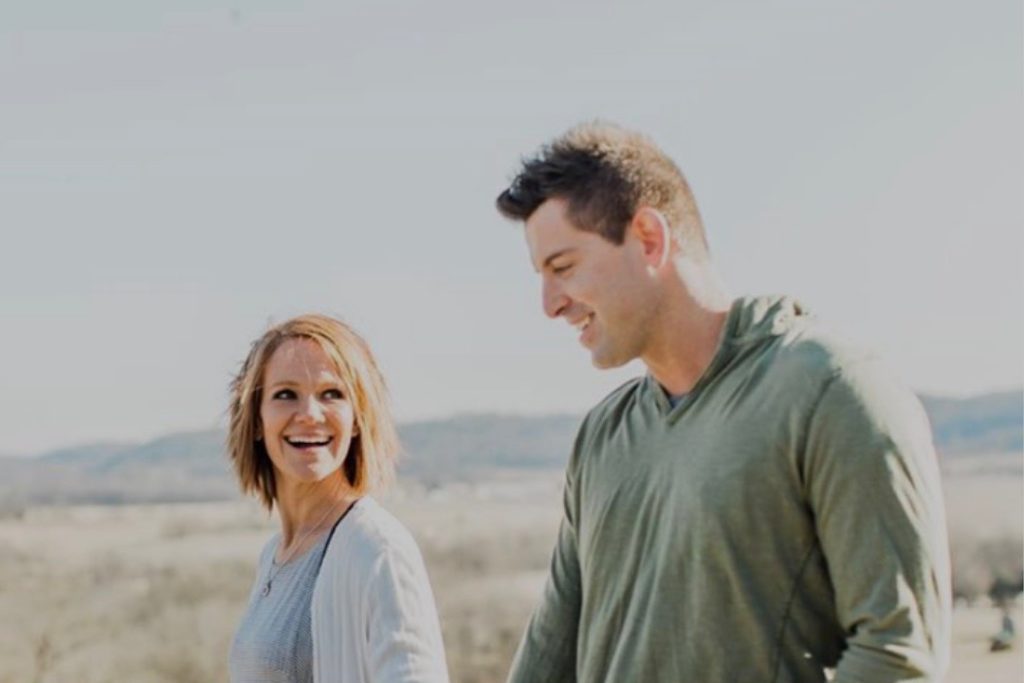 To get the opportunity to sit down with Jeremy and Adrienne Camp was such a treat for Pete and I. We actually recorded this episode as a live on Faith Sunday which was a part of a challenge we ran with Pete’s company. The week days were all around your business and for four Sunday’s we got to bring pastors and musicians and other believers to share. It truly was a special time for us in the midst of what’s happening with Covid-19 in our world.

It is not a coincidence that I am doing a podcast where people get to share their own stories. Stories have power, and if you haven’t heard me say it before, this will not be the last time.

Our stories have power.

I love a commercial that tells a story, I love a television show, a good book and especially a movie where I’m given the chance to watch either fiction or if I’m really lucky, nonfiction play across the screen. Any story that causes me to feel something and want to take action, you can sign me up.

So, when Pete and I heard a movie had been made about Jeremy Camp’s story, we knew we wouldn’t miss the opportunity to watch something that would impact millions of people and families all around the world.

So, on a Friday night, our two oldest (ten and twelve years old) and ourselves, went downstairs to settle in and watch,

As we all saw Jeremy’s story play in front of us, I couldn’t’ help but wonder how each of us would experience it in our own ways.

Pete watched it from the point of view of a husband. Of someone who not only knew what it was like to love someone who had been sick, he had been that husband who was afraid. Who didn’t know if their wife would survive. He’d been faced with seeing his wife helpless and in pain without any power to help.

He’d had the moments when he questioned God. So, when I heard him getting emotional, I had an idea what was going on in his heart.

And then there was myself. I watched it as a someone who had been sick at a young age. I knew what it was like to not know what the future would hold or what the reason was that I was battling something so hard. I’d been in those hospital rooms, scared and in pain. I’d seen the way my family hurt watching me go through the battle I was facing.

My emotions hit me in waves as I related with Melissa (Jeremy’s wife) and hurt for what she endured.

Then there were our kids. Each of them watching a story about love, dreams coming true, sickness, loss,

I wondered what their hearts were feeling and how they were processing the story that was playing out.

When the movie finished and the credits rolled we all sat in silence as we got ahold of our emotions, the tears and the thoughts that were going on inside ourselves. Once Pete was able to compose himself he turned off the TV and asked the kids how they felt.

To hear each of them walk us through what they took from the film was eye opening. It reminded us that they not weren’t little kids anymore but that they were aware of the pain and hurt others experience in our world.

And then Pete shared. He explained why he was so emotional. He begin to remind the kids of what he walked through with me and how watching Jeremy walk through that with Melissa and how it brought so many of those fears and feelings back up.

The movie gave us a chance to talk about what it means to not only believe in God but still love him in the midst of the pain. We (as believers) are not promised that our lives will be easy or free from pain just because we believe in God. In fact, we are told the opposite. We’re told that there will be pain but that we will not be alone when we’re in it.

As we listen to Jeremy talk about what he walked through, and how he handled the lowest of the lows he talked about a decision. He shared that he had to make the decision to,

Not to get stuck in the pain.

We could see that those weren’t just words he learned to say, that he knew what it meant to make the choice to keep going, to walk through the pain and to feel it, but not allow it to trap him or keep him from doing what not he was created to do and how he could continue to honor Melissa and her story.

In the movie, you see Melissa as she is in the worst of her pain, and you hear her say,

“If one person’s life is changed by my story, it was worth it”.

The strength in those words gives us a glimpse into the faith and plan she must have had for her life.

I can’t help but imagine that from the time Melissa was a little girl she dreamed about her life. She’d get married, have a family and do all the things. Then cancer. Getting diagnosed at such a young age was not a part of the plan. So, when the cancer went into remission only to come back right when those dreams and the plan she had for her life were starting to happen, the anger and the disbelief she could have felt would have been understood. But instead,

she made a decision.

A decision she made the moment she gave her heart to the Lord. She made the decision that no matter what, she would live her life to glorify him. And when she was in the moment when she could have easily said, “this isn’t fair” or “why me”, she looked outward.

She decided that it wasn’t about her, that it was about something much bigger.

It was about God.

Her focus was on what she coulddo in the midst of her situation. And that was to have faith. To have faith that what was happening to her was a part of a bigger plan. That if just one person could experience just a taste of what the Lord had done for her then every single part of it would be worth it.

For myself, the faith Melissa had was such a beautiful picture of how we can all pause and look at our own pain and failed plans. Instead of looking at how it is affecting us.

We can stop, and ask ourselves, “what can I do with this?” and “How can I use it to help someone else”.

It’s easy to look at our lives and our own situations and feel it’s not fair. And you know there’s nothing wrong with feeling that, but it’s like what Jeremy said,

You can’t get stuck there.

You have to keep moving. You have to go back to what that original dream was and ask yourself,

how can I use this?

As many of you know who heard the podcast or are familiar with Jeremy’s story, Melissa died a few short months after they were married. And the plan Jeremy had for their lives together looked very different.

But he didn’t stop there.

He made a decision to keep moving. To continue persuing what the Lord had put in his heart and through his music and career, he not only has had the opportunity to take Melissa’s story to one person but to millions.

I have to believe that there are moments Jeremy has stood on stage after telling their story and smiled as he looked out over the thousands of faces and thought, “there you go Melissa. It wasn’t for nothing”. And now as their story is told through this movie that has been released worldwide, it’s another moment to stop and smile.

“It wasn’t for nothing.”

If you listened to the podcast then you’ve already heard me fall apart and try to hold it together to speak how I felt to Jeremy’s now wife, Adrienne Camp. Jeremy and Adrienne have such a beautiful story of their own that is touched on at the end of the movie and has continued over sixteen years later.

While we sat and listened to Jeremy tell the story with Adrienne by his side, I couldn’t help but be overwhelmed by emotion and admiration.

I got to ask her what gave her the strength to come along side and not only accept this part of Jeremy’s story but to embrace it as her own and continue to honor Melissa. Her answer was so beautiful and honest. She said,

“it hasn’t always been easy”.

To hear her share about the role she’s taken and how while it’s not always easy she knows what an honor it is to be able to bring Melissa’s story and what she went through to so many. It’s a beautiful picture of what marriage is all about.

It’s about two people with their own stories and their own plans coming together. It’s about coming to a realization that our stories and our plans aren’t our own anymore. And to see what Adrienne has done through her life and her marriage to Jeremy is an example to us all.

When I say it was a honor to spend this time with Jeremy and Adrienne I’d be lying. It wasn’t only an honor but it was a conversation I will treasure my entire life.

So, please, if you haven’t seen the movie or experienced Jeremy’s music, make sure you gather your family and watch I Still Believe.

I promise you will be blessed!