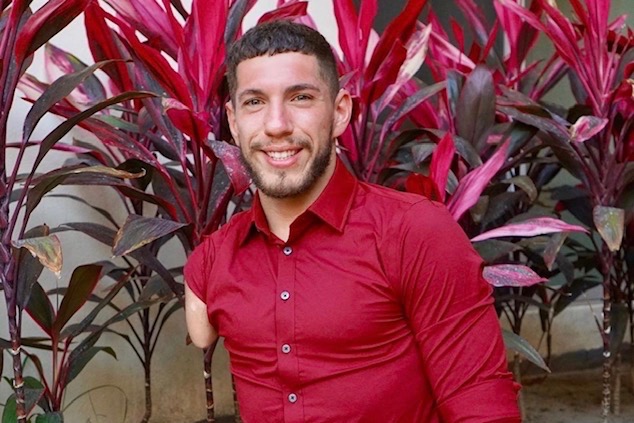 His name deserves to be a sentence all on its own. From the moment he was born he defied the odds. And he hasn’t stopped since his first breath. Getting to hear his story and the excitement he has not only for the highs but also the lows was something I was thrilled to have our own kids in the room for.

From the moment Nick’s parents heard the doctors tell them their baby’s limbs weren’t developing, they choose to focus on the possibilities. The previous cases of children born with Heart-hand syndrome were devastating and the odds were stacked against them.  But instead of focusing on what Nick wouldn’t have, they made the decision to see the beauty.

I believe it was that decision. The decision to see the beauty in the midst of their circumstances that set Nick on his path.

I noticed something as I went back and listened to this week’s episode. There was a word that seemed to find its way into my notes over and over again.

When the world wanted to limit Nick and what he’d be capable of, his parents spoke life. They invited people in and let their community, family and the world know that their son was perfectly made. That he would do and be anything he wanted.

It made me ask myself a question. Why are we as humans so easily limited? Why do we accept the labels and abilities places upon us?

As parents, we want our children to be safe. Free from pain. Free from hurt and free from the cruelty of the world. However, Nick’s parents made a choice. From the minute they knew life wouldn’t be easy for him, they choose to teach him how to,

They allowed him to learn, to struggle and to fall. They taught him that when you fall, you get up. And when it happens again, you get up and continue to try. If super powers were hereditary, that would be theirs.

From a young age, he was taught to put himself out there. He learned instead of agreeing to how the world wanted to limit him, he asked himself a question.

The list of Nick’s accolades is long and impressive, but the one that I most admire, is his heart for kids and teens and his new mission to bring positive mind-set building tools to them each and every week. His passion is to strengthen the minds of our young people and I believe there isn’t a more important obstacle we face today.

It’s through Nick’s heart, his passion for life, and his fearless approach to life’s challenges that make him a real life super hero.

As we approached the end of the interview we asked him two questions. One that was close to my heart. I asked him to speak to those listening who find themselves in a similar situation. A challenge that’s physical. I know personally what it’s like to battle a disease and to feel that my body has failed me. But I know there are so many others out there who are battling their own sort of war.

One of the body. The function and ability that maybe they once had and now because of circumstances out of their control they are faced with new limitations. Limitations not only in their bodies but also limitations within their mind.

Nick’s answer was clear. He said,

“focus on the things you are able to do”.

Then find what makes you happy and do it.

There is always a way.

And if anyone is living proof of those words, It’s Nick Santonastasso. He’s lived what he teaches.

–Find Clarity. What’s your compelling why? Find that thing that drives you.

–Build Confidence. By committing to yourself and then following through is the way to building your confidence. When we don’t keep our word, we diminish the way we see ourselves.

–Be Consciousness. Be conscious of the words you speak. The things you speak out loud and your inner dialogue.  Then self-praise. Acknowledge when you’ve done something well.